Your cart is still empty.
Most of our happy customers start with our 🌱 Plant-based Lifestyle Guide, and then go from there.
Product is not available in this quantity.
Home
→
Vegan News
→
We’ve been taking plastic for granted - now would be a good time to stop

By Simple Happy Kitchen news |
July 13, 2022
You're subscribed!
Oops! Something went wrong while submitting the form. 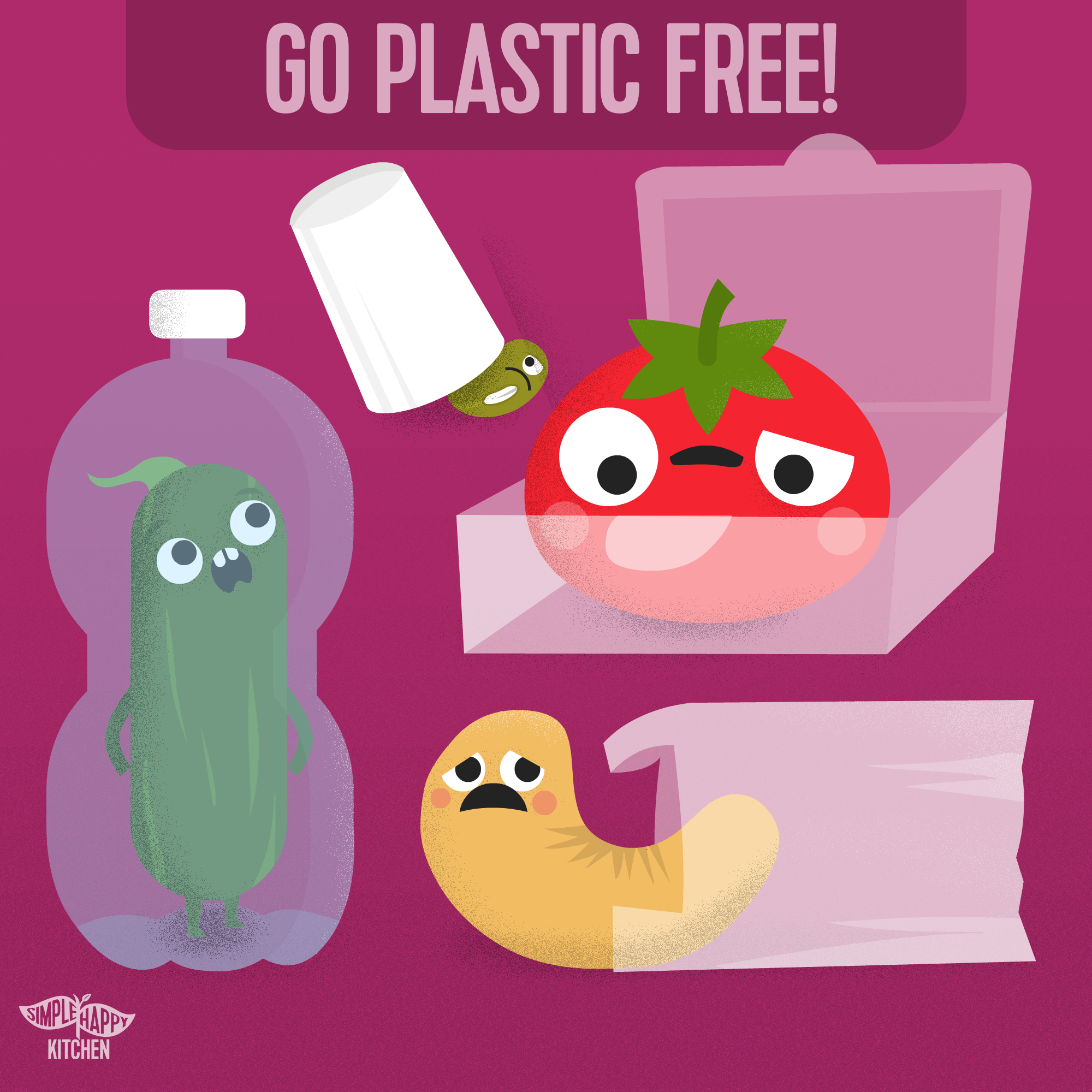 July is the global Plastic Free month, an entire month dedicated to significantly reducing the plastic in our lives. Today we’re here to examine just how much plastic exactly is in our lives and why that’s not a great thing for us and for the planet.

Plastic has changed the world as we know it. So much so, that some scientists have declared the current age to be the Plastic Age. Ever since its invention at the beginning of the last century, plastic has utterly revolutionized the way we manufacture, use and dispose of stuff. It won’t be an overstatement to declare that plastic has completely changed our perception of the objects in our lives.

Now, imagine for a moment a pile of 882,000 Eiffel towers. Why are we asking you to do such a bizarre thing? Because that’s the equivalent of the amount of plastic manufactured up until 2015: 8.3 billion metric tons of plastic. Half of it was manufactured during the last 13 years, evidence that humanity's love affair with plastic is only growing stronger and stronger.

This is where the problems begin: plastic is a non-Biodegradable material. Instead of disappearing with time, it only splits into smaller pieces. Macro-plastic is any piece of plastic larger than 5 millimeters. Pieces smaller than that are called Micro-plastics and anything smaller than 1 μm is called Nano-plastics, which are considered to be the most toxic and hazardous of the bunch.

Today, after over a hundred years of intensive plastic usage, we’ve reached the point where some form of plastic is in almost anything and everything you can think of: it’s in our food, our water, and even in the air that we breathe. The average person may be consuming a staggering number of up to 52,000 pieces of plastic every year (but we’ll get to that).

All of the above mentioned forms of plastic can be found in the ocean, and are also carried in the wind to pretty much every corner of the planet. Last January, it was even published that nano-plastic was discovered in both of the earth’s poles for the first time. Micro-plastic has long ago been found on the summit of mount Everest and on the oceans’ floors.

So how does all of this affect the environment and all living creatures on it? Poorly, of course. The tiny plastic particles are not only non-biodegradable, they also often carry with them some toxins and destructive chemicals. A research from 2020 found that micro and nano-plastics had some effects over the biological functions of fish. That included their behavior and neurological functions, metabolism, intestinal permeability and intestinal microbiome diversity.

Since this whole thing is a relatively new problem, there’s not enough research about the long-term effects of those tiny plastic particles on human health. Even so, one study from 2021 has already found that micro-plastics cause damage to human cells as well. In other words, the study showed that the current average levels of plastic intake by humans (via food) can lead to cell death and allergic reactions.

How much plastic finds its way into our body? Way too much

That would be the proper moment to ask: but how much plastic exactly are we talking about? How much of these plastic particles find their way into our system every year? A study from 2019 found that the average person might be consuming anywhere between 39,000 to 52,000 micro-plastic particles a year.

That number is probably under-selling it too. Add to that the micro-plastic that might be inhaled and the number goes up to at least 74,000. Putting it simply, the average person might consume the equivalent of a credit card worth of plastic EVERY WEEK.

We know all of this seems overwhelming, but there is actually a lot that can be done. There are plenty of small yet profound daily actions any one of us can take to make sure that less plastic will end up in places we don’t want or need it. Plastic Free July is a great place to start!

So how can I use less plastic?

First of all, awareness is already half of the solution. Realizing how dependent we are on plastic, and how much damage it is doing is the first step towards change. It’s just one of those things where once you notice it, it's hard to un-notice. Here are a few easy-to-implement steps towards a plastic-reduced future:

Look around you. To understand just how much plastic is in your life, it’s really enough to just look around and see how plastic is everywhere, even in things we didn’t suspect. Think about the way you use these things, how much of it is disposable (about 40% of all plastic manufactured today goes towards packaging) and how much of it is actually necessary and cannot be replaced with a different material.

Start thinking about alternatives. Make it a habit to carry a reusable coffee cup and water bottle with you. You can even include a set of reusable travel utensils (there are some really cute things out there) while you’re at it. When you go shopping, don’t forget to bring your reusable bags (there’s even a Simple Happy Kitchen one! Just saying) and prefer buying foods that are available in bulk, using containers you brought from home.

Also while shopping, it’s good to be mindful of excess packaging (a common thing nowadays, unfortunately) and prefer brands that don’t overpackage their products. There are also some great alternatives to products that are usually made of plastic like toothbrushes or toothpicks. A little bit of awareness and extra attention while shopping can really go a long way!

Think twice before throwing something out. Are you sure you can no longer use it? Can it maybe be fixed? Can you maybe pass it along to someone else? We tend to get rid of stuff without putting too much thought into it, because everything seems so disposable and easily replaced, but that too can be changed with a little bit of reflection. Single-use items don’t always have to only be only used once. Old items can be repurposed.

And of course - don’t stop recycling. We know that sometimes it feels like a tiny drop in a plastic filled ocean, but remember that even a small percentage of a huge amount is a lot. Recycling is a way to make sure that at least some of all that plastic doesn’t end up in our water, land and air.

For tons of helpful ideas and inspiration, we recommend checking out Plastic Free July’s guide to reducing plastic in your daily life.

The most important thing when it comes to plastic reduction is your attention. It’s as simple as that. So many years of unsupervised usage of this popular material means that we kind of take it for granted by now. It’s always been a huge part of our life and it’s only getting worse, so just starting to pay attention to it will inevitably change your relationship with plastic. It won’t always be convenient or fun, but we simply have to make this change - before it’s too late. 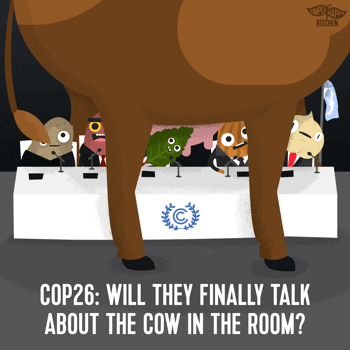 COP26: Will they finally talk about the #CowIntheRoom?

The world gathered once again last weekend to discuss one of the most pressing issues of our time, the climate crisis.
Continue Reading 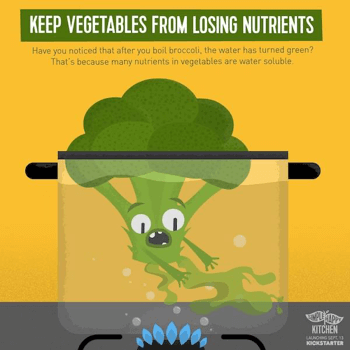 This is how you can keep vegetables from losing nutrients 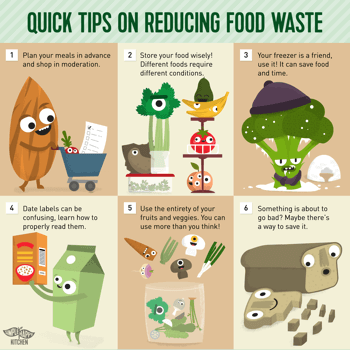 Food loss and waste is a global issue. Here are a few easy ways to fight it!

Today is the International Day of Awareness of Food Loss and Waste. Yes, food waste is such a big deal that the UN has decided to dedicate a day to it, and we think it’s a great opportunity to share some useful tips about how each and every one of us can waste less food!
Continue Reading