Your cart is still empty.
Most of our happy customers start with our 🌱 Plant-based Lifestyle Guide, and then go from there.
Product is not available in this quantity.
Home
→
Vegan News
→
We're celebrating Veganuary and everyone's getting gifts!

By Simple Happy Kitchen news |
January 3, 2023
You're subscribed!
Oops! Something went wrong while submitting the form. 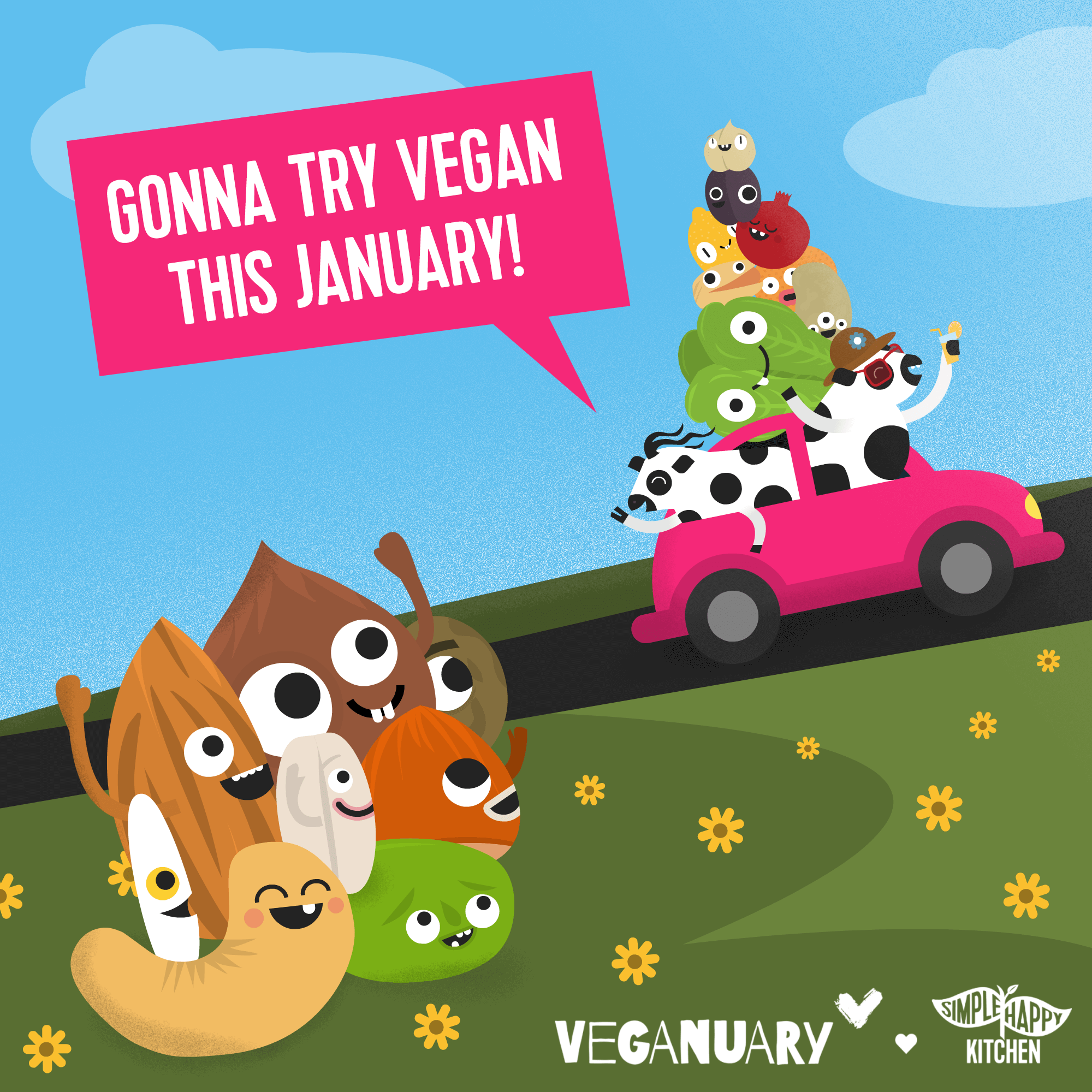 We are so thrilled and proud to announce we will be supporting Veganuary 2023! We’ve  created a bunch of special offers, free stuff and exclusive surprises. Also, we’ll be donating 33% of January’s sales to Veganuary! Take a look at all the details here.

You might have already heard about Veganuary and its quest to help people try veganism for the first month of every year, but Veganuary is so much more than that. Through continuous and consistent hard work, this small non-profit organization from the UK has been growing and making some actual global impact.

Cool, but what does Veganuary actually do?

Veganuary is a non-profit, dedicated to encouraging and helping people from all over the world to try adopting the vegan lifestyle for the duration of January and beyond. Every person who signs up receives a long line of free resources and perks (for example, this year’s participants will be receiving a celebrity cookbook with some awesome recipes by Venus Williams, Alicia Silverstone, Bryan Adams and many more familiar names), all to help them easily implement veganism into their lives.

Impressive, right? Well, that’s just the tip of the iceberg lettuce! More than 800 new vegan products were launched and promoted by companies worldwide for Veganuary 2022, and over 740 new vegan menus were added to restaurants. And there’s even more!

Veganuary's media coverage, both on social and traditional media, continues to grow every year, bringing greater attention to the many benefits of veganism, encouraging even more people to try vegan for the first time.

All of these things Veganuary has been doing for the past nine years have been creating an ongoing wave of awareness to the vegan cause, with 28% of the most recent Veganuary  participants sticking to a fully vegan lifestyle even after January, and many of the new vegan products launched during the campaign staying on the shelves all year round. They even have a name for this phenomenon: the ‘Veganuary Effect’.

The first ever Veganuary took place in 2014, with 3,300 participants from different countries around the globe. During the 2022 Veganuary campaign, not even a decade later, 629,000 people registered from 228 countries — nearly every country in the world! with the exception of Tajikistan and North Korea (where the internet is banned) — Can you believe it? Most amazingly, according to their six-month follow-up survey results, 86% of participants are extremely likely to try veganism again in the future!

Although it originated in the UK, Veganuary has long since become a global operation. It now has seven official country chapters in the UK, US, Germany, India and Latin America (Chile, Argentina and Brazil), and also works with partner organizations in Australia, Singapore, France, South Africa, Switzerland and Italy.

This is already very impressive, but as far as Veganuary’s concerned — it’s only the beginning: they plan to reach 10 million participants by the 2027 campaign.

We want to support Veganuary in achieving this goal. You can help them too! Just visit the Simple Happy Kitchen store where you’ll get 25% off and we’ll donate 33% back to Veganuary!

Veganuary’s dream, and where Simple Happy Kitchen comes in

Behind such a great force, there must be a great dream, and Veganuary’s dream is clear: living in a vegan world.

“A world without animal farms and slaughterhouses. A world where food production does not decimate forests, pollute rivers and oceans, exacerbate climate change, and drive wild animal populations to extinction. A world where everyone is able to enjoy an endless variety of delicious and nutritious foods while protecting the planet and animals,“ declares Veganuary’s website. We really couldn’t agree more.

Since it started, over 2 million people have signed up to take the Veganuary pledge, sparing the lives of 6.7 million animals and 12.4 million liters of water as a result. This massive amount of people trying veganism has also resulted in 207,680 tonnes of CO2 being saved, equivalent to 2.4 million flights from London to Paris.

That’s why we are so excited to be taking part in this awe-inspiring operation this year, hoping we could help, even if only a little, to support someone who’s decided to give veganism a try for the very first time.

Simple Happy Kitchen’s mission is not very different from that of Veganuary’s: to end the use, abuse, and consumption of animals worldwide, by helping as many compassionate people as possible to transition into a plant-based diet and go vegan.

We do that by using easy-to-understand, fun and funny, digital and physical creative products to educate people about animal ethics and the benefits of plant-based nutrition and its effect on our health, the animals, and the planet. What exactly do we have in store for the 2023 Veganuary campaign? Keep reading to find out, or you can skip directly to our special Veganuary page.

What’s waiting for Veganuary participants in 2023

This year’s Veganuary campaign is set to be an innovative one, with a new podcast launching and a new 31-day YouTube series airing for the first time. The celebrity recipe book we’ve already mentioned (for real, it's’ so good! We can’t wait to make some of those yummy-looking dishes at home) will include affordable “One-Pot Meal” recipes for the first time.

The cookbook, by the way, is far from being the only perk participants of 2023 Veganuary will be getting. Meal plans, nutrition planners, daily tips and advice and so much more helpful data are also part of this sweet deal.

As proud supporters of Veganuary 2023, we will be offering our own exclusive collection of totally-free treats!

Make sure to check out the Simple Happy Kitchen January daily tips calendar and vegan grocery shopping list. Don’t forget to download the protein, calcium, and iron posters that will help you meet your daily nutritional needs.

We are also giving away for the first time a free, ready-to-print digital version of our coloring book, ideal for children of all ages who’d like to learn about everything plant-based!

We’re not even done yet, see, we’ve saved the best for last: everyone will be getting 25% off our entire shop using the special coupon code VEGANUARY2023, and, we will be donating 33% of all January sales to Veganuary! So that they can keep making the world a better place, one January at a time.

We get so inspired and hopeful every January just by witnessing Veganuary’s impact, and this year we even get to support it and help make some real change in the world. Just like the very wise words of some very wise people: “where there’s hummus, there’s hope.” 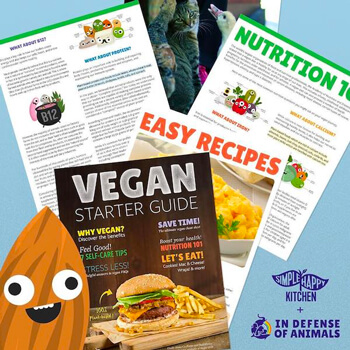 Vegan Starter Guide of 'In Defense of Animals’ 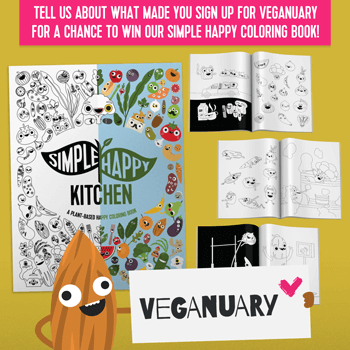 Tell us about what made you sign up for Veganuary for a chance to win our Simple Happy Coloring book!

Today marks not only the beginning of a new year, but perhaps also the beginning of a healthier, more compassionate, better for the environment way of life for the hundreds of thousands of people who chose to sign up for Veganuary!
Continue Reading 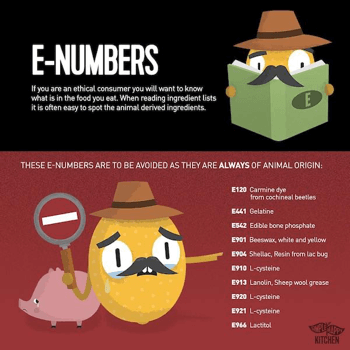